The first solo exhibition at UCCA Edge charts the artistic development of pioneering Chinese realist painter Liu Xiaodong in the past decade with over 120 new and existing works.

SHANGHAI, China — From August 8, 2021 to October 10, 2021, UCCA Edge presents its first solo exhibition, “Liu Xiaodong: Your Friends.” A pioneering painter of a new realism in China, Liu Xiaodong (b. 1963, Jincheng, Liaoning province, lives and works in Beijing) emerged in the 1990s, known for his acute and lucid depictions of the minute changes he observed in different slices of China’s rapidly urbanizing and developing society. Since the early 2000s, he has been known to work on-site in locations of particular poignance, from the construction site of the Three Gorges Dam to the U.S.-Mexico border during the Trump administration. This exhibition charts Liu’s artistic development in the decade since his 2010 exhibition “Hometown Boy” at UCCA Beijing, bringing together more than 120 new and existing works, including his latest series “Your Friends,” as well as sketches, diaries, and a new documentary film by long-time collaborator, the director Yang Bo. “Liu Xiaodong: Your Friends” is curated by UCCA Director Philip Tinari and UCCA Curator Yan Fang.

The title of the exhibition was inspired by Liu’s amusement at his friend, the director Zhang Yuan’s constant use of the phrase “your friends” during their portrait sessions. Divided into three sections—“The Anonymous Walker,” “Lands Revisited,” and “Your Friends”—this exhibition follows the artist’s footprints beginning with snapshots of quotidian life in small-town Northeast China, tracking his travel throughout China and abroad, and ending with the series “Your Friends,” completed upon his return to China after an extended pandemic-year stay in New York. Throughout, Liu maintains his calm and observant gaze on the lived experiences and inner life of ordinary people under the ever-evolving conditions of social reality. Beginning with looking back on his childhood friends in his Northeastern hometown and ending with looking at those nearest to him and best friends from Beijing for over three decades, Liu’s shifting subjects allow for an extended meditation on the layers of meaning in “friends,” the intimate relationships and social relations that bind us to each other, as well as a key to understanding the development of the artist’s practice in the past decade.

The first section, “The Anonymous Walker,” brings together previous works exemplary of the artist’s photographic eye in his realist painting practice. Here, Liu immerses himself in the lives of others in different parts of the world as a painter, bringing his “studio” with him on the road to create en plein air works that engage with the geopolitical specificity and narrative significance of these locales. The subjects of these thematic series encompass his hometown Jincheng (“Hometown Boy” and “Jincheng Story” series), the Chinatown neighborhoods of Tuscany and refugee routes in Europe (“Migration” series), ship breaking yards in the Bangladesh port city of Chittagong (“Chittagong” series), and ultimately, his adopted hometown of Beijing (“Your City” series). Documenting the impact of broader trends and social developments on the lives of different demographics— cultural conflict, geographical estrangement, migration—Liu’s warm, humanistic canvases depict their joys, hardships, and subjectivities in an unvarnished manner.

The second section, “Lands Revisited,” features the watercolor works completed by the artist during his extended stay in New York due to the pandemic (“New York 2020” series), a series of “Square Watercolor” portraits of his family and friends, the two notebooks Heitukeng Compositions and Half a Lifetime that features his family and friends, and a selection of still lifes and character studies (“Heitukeng Brother” series). In the process of creating these watercolors, Liu took pleasure in painting with a narrative sensibility previously not found in his larger-scale works, revealing a more personal and emotional side of his practice. “Lands Revisited” marks a turning point in Liu’s practice in the past decade, which captures the two- fold meaning of lands revisited for Liu: New York and Heitucun, the village of his father’s ancestral home in Liaoning province near Jinzhou (known to locals as Heitukeng). In 1993, Liu and his wife Yu Hong had first set foot in New York as young artists pursuing their dreams; decades later, in 2020, Liu found himself and his family stranded in New York for a second extended stay due to the pandemic. During the months-long separation between Liu and his friends and other family members back home under the threat of the deadly virus, upon his return to Heitukeng, Liu began to reflect on the nature of human connections, and turned his creative energy towards the individuals in his life he holds dearest, both personally and artistically—his family members and friends who have been closely involved in his artistic practice—resulting in the series “Your Friends” in the third section of the exhibition.

“Your Friends” is a new cycle of portraits of those nearest and dearest to Liu in life and art. Liu began work on these portraits immediately after he returned to China from New York last October and the series was completed early this summer. Liu has long been interested in exploring the complex connection between origin and outcome, between demographics and destiny. “Your Friends” expands the framework to include the figures who have become his closest friends in the three decades he has spent working in Beijing. Subjects include renowned writer Ah Cheng and leading directors in China’s “Sixth Generation” cinema Wang Xiaoshuai and Zhang Yuan, as well as the family members who will always be at the core of his story—Liu’s mother, brother, and Yu Hong. In this cycle, rather than the urgency of quick studies at the scenes of intense social and historical signification, we see the subtle, nuanced power of the influence of familial intimacy sustained by time, as the artist turns his attention towards those select individuals with whom he enjoys the bonds of kinship, be it filial, fraternal, romantic, artistic, or stylistic. In doing so, the artist invites us to reflect on the ties that bind us to our moment and to each other.

Following the inaugural exhibition at UCCA Edge that brought together works by contemporary Chinese and international artists in a group show that looked back at the juncture when art and artists in China came to envision itself as part of a global contemporary, “Liu Xiaodong: Your Friends” examines the social development and epochal changes in the past decade through the lens of one artist’s unflinching attention to these realities both domestically and around the world. Within these scenes of a kaleidoscopic variety of ordinary lives caught in the tides of changing times, Liu captures especially the connections between humans that transcend culture, politics, and race, pioneering a new mode of realism in a country with a long social realist heritage, and persistently probing the meaning of the historical present.

The accompanying bilingual catalogue Liu Xiaodong: Your Friends released by UCCA will include the exhibition’s oil paintings, watercolor drawings, and paintings on photographs alongside a selection of the artist’s diaries and still from a documentary film about the titular series, directed by Yang Bo. Together, these materials comprise a comprehensive record of the artist’s creative process. The catalogue is divided into two section: “Your Friends” presents the artist’s newest series, an emotional observation of his closest friends and relatives, while “The Anonymous Walker,” a curated selection of his previous works, is a snapshot of his travels around the world over the past decade and the paintings that grew out of these journeys. The publication also includes an essay by UCCA Director Philip Tinari that discusses these recent works, a text by anthropologist Xiang Biao that explores bodily imagery in Liu’s paintings, and a dialogue between UCCA Curator Yan Fang and the artist about the curatorial themes of the exhibitions. The catalogue is designed by Studio Pianpian He & Max Harvey and published by Zhejiang Photographic Press.

During the exhibition period of “Liu Xiaodong: Your Friends,” UCCA Edge will present a series of enriching public programs every weekend, including five Inspiring Guides by special guests, and a series of eight talks, screenings, and workshops closely related to Liu Xiaodong’s artistic practice, as well as panels with other artists and scholars. Follow UCCA Edge on our official website, WeChat account, and other social media platforms for more details. All events are free and open to the public with limited capacity. Please register in advance. Please see our official event announcements for the most updated information. 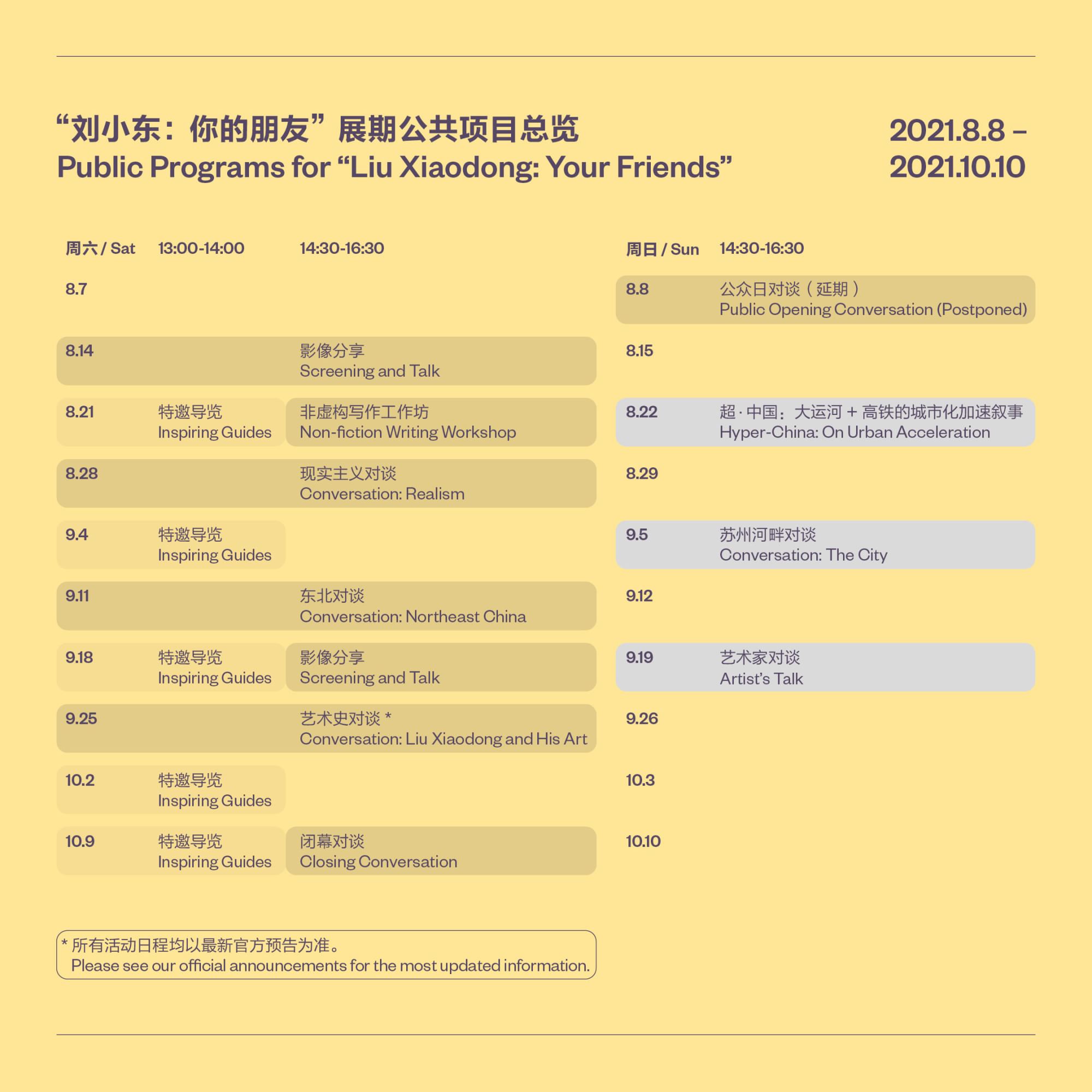 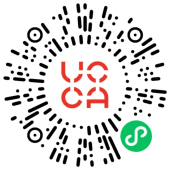 Things Aren’t Bad as They Could Be

Crowd by the Hudson

Ning Dai in Person Having a Laugh