Thomas Demand: The Stutter of History

Career-wide survey of Thomas Demand’s architectonic photographic work presents disquieting, seemingly banal facsimiles of historical scenes, and the strange gap between the world we inhabit and the images we consume.

SHANGHAI, China — From July 8 to September 4, UCCA Edge presents “Thomas Demand: The Stutter of History,” a career-wide survey of Thomas Demand’s (b. 1964, Munich, lives and works in Berlin and Los Angeles) sculptural and photographic work that captures the uncanny intersections of history, images, and architectonic forms. Showing over 70 photographs, films, and wallpapers that span the arc of Demand’s career, this exhibition, his first comprehensive survey in China, will focus on four important areas of the artist’s work: large-scale photographs that depict seemingly banal but historically significant scenarios reconstructed based on news or other source images; the personal “Dailies” constructed from images taken with his phone; photographic studies of paper models by architects and a fashion designer in the “Model Studies” series; and the artist’s moving image work. “Thomas Demand: The Stutter of History” is curated by Douglas Fogle for the non-profit organization the Foundation for the Exhibition of Photography (FEP, Minneapolis/Paris/Lausanne), and is organized at UCCA Edge by Ara Qiu, Mason Zha, Zhang Yao, and Lin Luqi. UCCA Edge thanks audiences for their understanding regarding the impact that recent pandemic-related restrictions have had on the exhibition’s originally planned opening date and duration. We are also grateful for the cooperation of museum visitors as we follow recommended pandemic prevention measures to ensure a safe viewing experience for all.

For Demand, “The Stutter of History” lies in the gap between existing images that depict the world around us, the 1:1 paper models he meticulously builds to reconstruct the spaces within these images, the photographs he takes of these models, the subsequent destruction of the models, and the para-photographic forms that then relaunch into the world. In the first section, the “uncanny histories” of Demand’s large-scale photographs depict scenarios from the margins of historical events, moments, and developments throughout the twentieth century. These include the Gangway (2001) that Pope John Paul II descended on his visit to unified Berlin; the Bathroom (1997) where Uwe Barschel, Minister-President of a German state, was found dead under dubious circumstances in 1987; and polling centers for the contentious 2000 United States presidential election (Poll, 2001). A selection of works also confront images associated with the Nazi regime and other traumas in German history, such as Room (1994), the shambolic site of a failed attempt to assassinate Hitler in 1944; German film director Leni Riefenstahl’s monumental Archive (1995); the Diving Board (1994) that evokes the controversial 1936 Berlin Olympics and the diving sequence in Riefenstahl’s Nazi-commissioned documentary of the games; and the ransacked Office (1995) of the former East German secret police. Closer to the present day, the five works in the “Refuge” series (2021) re-create the bleak, generic, and paranoia-inducing Russian hotel room presumably occupied by the fugitive American national security whistleblower Edward Snowden. Together, they highlight the banality of a state of emergency in the contemporary world of technological surveillance.

As a counterpoint to the public and monumental, the “Dailies” series (2008-2020), shown on the third floor, is the result of Demand’s shift towards the personal and quotidian as the images that circulate on social media have come into their own as a distinct genre. Sized and framed in a manner similar to traditional photographs, the “Dailies” are photographs of paper models Demand reconstructed based on personal photographs taken with his iPhone on walks through his neighborhood and during his travels. These photographs depict the ordinary, sometimes humorous, and often overlooked moments that populate everyday life—a pile of unopened mail, a poster with tear-off tabs on a telephone pole, plastic cups stuck in a chain link fence. Presented on their own terms without further elaboration, they also pose as openings to stories that remain to be written.

Turning outwards and departing from sculptural reconstructions of images, Demand enters into a dialogue with models from other creative professions in his “Model Studies,” connecting them to his own practice through an approach that is more utopian than utilitarian. He first began the series while in residence at the Getty Research Institute in Los Angeles in 2011. The photographs on display here make fragmented and abstract studies of well-worn paper models from the architecture studio SANAA, as well as the radical paper dress patterns of fashion designer Azzedine Alaïa, offering an alternative dimension to the use and haptic materiality of models, and the world that has been built based on them.

Finally, the exhibition investigates Demand’s commitment to the moving image in his explorations of stop-motion filmmaking, as demonstrated in the work Pacific Sun (2012). Housed in a cinema-like intervention specially built in the fourth floor gallery, this epic, absurd stop-motion animation film is reconstructed from two minutes of security footage from the cruise ship Pacific Sun as it was hit by gigantic waves during a tropical storm off the coast of New Zealand. Demand’s fastidious paper re-creation of the cruise ship—without its human populace—and choreography of its frenzied moments of uncontrolled chaos culminate in climatic absurdity, a state that is central to the gulf between the disquieting, utopian potential of his paper models and the mass consumption of their photographic doppelgängers.

Apart from individual artworks, exhibition design is an integral part of Demand’s conceptual approach to artistic production and his long-standing interest in architecture. With his architectural use of textiles, wallpapers, and temporary structures, Demand creates an immersive environment for the spectator, in which image and world collide.

Accompanying the exhibition, the English-language catalogue The Stutter of History has been produced in collaboration between the artist, art director Naomi Mizusaki, and Demand’s longtime publisher MACK. The catalogue contains a curatorial introduction by Douglas Fogle, an essay by the art historian Margaret Iversen, and an original prose fiction piece by the Scottish author Ali Smith, inspired by one of the artist’s photographs.

During the exhibition period of “Thomas Demand: The Stutter of History,” UCCA Edge will present a series of enriching public programs every weekend, including four inspiring exhibition tours led by special guests, eight conversations and workshops on topics closely related to or inspired by the work of Thomas Demand, and panels with artists and scholars. As scheduling and event venues may be subject to change, please follow UCCA Edge on our official website, WeChat account, and other social media platforms for more details and potential updates. All events are free to the public, and require advanced registration. 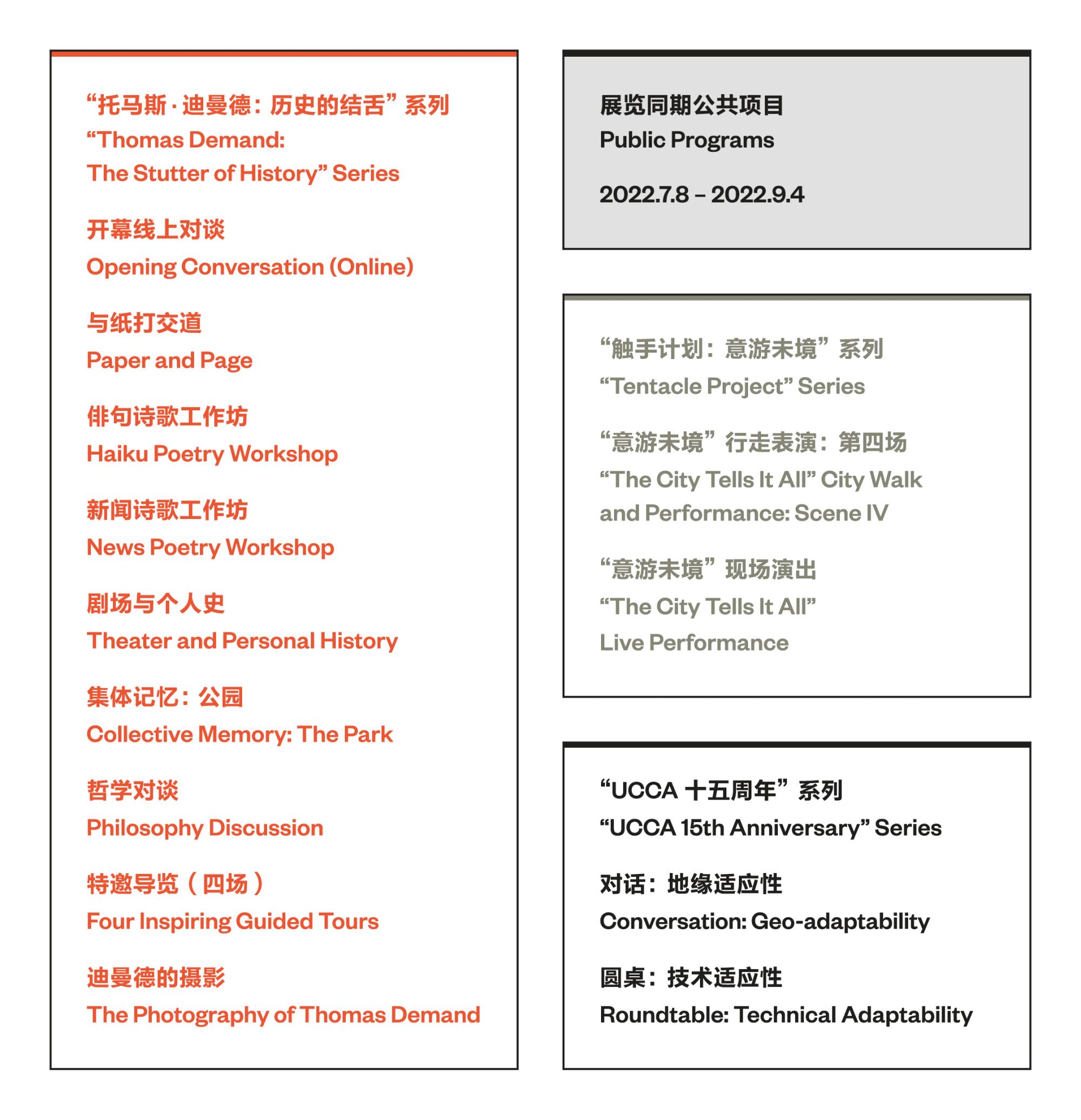